On 13th December 2017, French Transport Minister Elisabeth Borne closed the National Forum on Mobility with the commitment that “cycling would no longer be looked upon with contempt”.

In this context, the last few months have seen French parliament fiercely debate the draft Mobility Orientation Bill submitted by Government. FUB has been actively involved so that cycling can finally be considered as a means of transport in its own right, with some success. Indeed, approximately 10% of the tabled amendments (over 300) were linked to cycling.

Following adoption by the Senate in March, the French National Assembly approved the Mobility Orientation Law on June 18th. Two further commissions await. But with the law already debated extensively in both Houses, we can already acknowledge some breakthroughs and future points of vigilance.

The right to active mobility : A symbol

Being able to walk and pedal becomes a right. Whilst this is essentially just symbolic progress, the stated objective to fight sedentary lifestyles will be enshrined in the Law. This will constitute an excellent judicial pillar.

The official “Savoir Rouler” (Learn to Ride) education program has been adopted by the National Assembly. The objective is to “ensure that every child is able to ride a bike autonomously and safely in the public space by the time he/she enters secondary school”. The details fall short of FUB’s recommendations on the subject, as well as the Senate’s. there is no mention of whether this program will be universal and compulsory or not.

This measure is key to lead to a cultural change in our daily mobility, and it will be less efficient if it is not applied all over the land.

We have moved from a kilometre allowance (IKV) that couldn’t be combined with other modes of transport to a fixed and combinable annual pack decided with the employer. While the IKV was not subject to tax up to 200Ä/year, for the Sustainable Mobility Pack that figure rises to 400Ä/year.

Private employers may choose to give their employees more, but they would then be subject to tax.

Whist this measure has not been made compulsory for all employers, the State has nevertheless promised to lead by example and to give 200Ä to their staff who choose to cycle to work.

More safety for cyclists thanks to continuous cycling routes

The bill strengthens the environmental code, which makes it compulsory to maintain and create cycle routes when roads are renovated. The cycling budget has also been confirmed (350 MÄ over 7 years), in addition to an endowment fund of 100 MÄ/year, mainly focused on fixing black spots. Creating cycle route discontinuities will become illegal !

Another major progress thanks to FUB’s great advocacy work involves the mandatory ‘marking of both new and second-hand bikes’ starting in 2021, with the creation of a single dedicated national database. Because fighting bike theft is an international concern for policy-makers, we hope that other European countries will be inspired by this regulation and that this database will be extended continent- wide.

Because the devil is in the details, small advances can become real game changers in the future. Advertising for motorized vehicles will have to include a promotional message for active mobility and public transportation, and it will be much easier for an individual to install a bicycle parking facility in co-owned housings.

Easier travel with your bike ?

The European Council is due to accept or reject the European regulation voted at the end of 2018 aiming to ensure there are a minimum of 8 spaces for fully assembled bikes in new and refurbished trains within two years. In France, the number of spaces for bikes in trains will be decided by decree. Unless a motivated exemption request is approved by the local transport authority, public coaches will need to have at least 5 spaces for assembled bikes. We hope the European Council’s decision will help to later reverse this situation.

Although travelling with a bike remains difficult, bicycle parking in train stations will be encouraged by decree, and is set to appear massively everywhere in France.

Thanks to FUB’s “Parlons-Vélo” (let’s talk about bicycle) campaign, cycling has focused the attention of the press, the general public, MPs, and Government at all stages of this bill. FUB welcomes this amount of constructive debate and we are now proud to say that cycling has entered the French law. 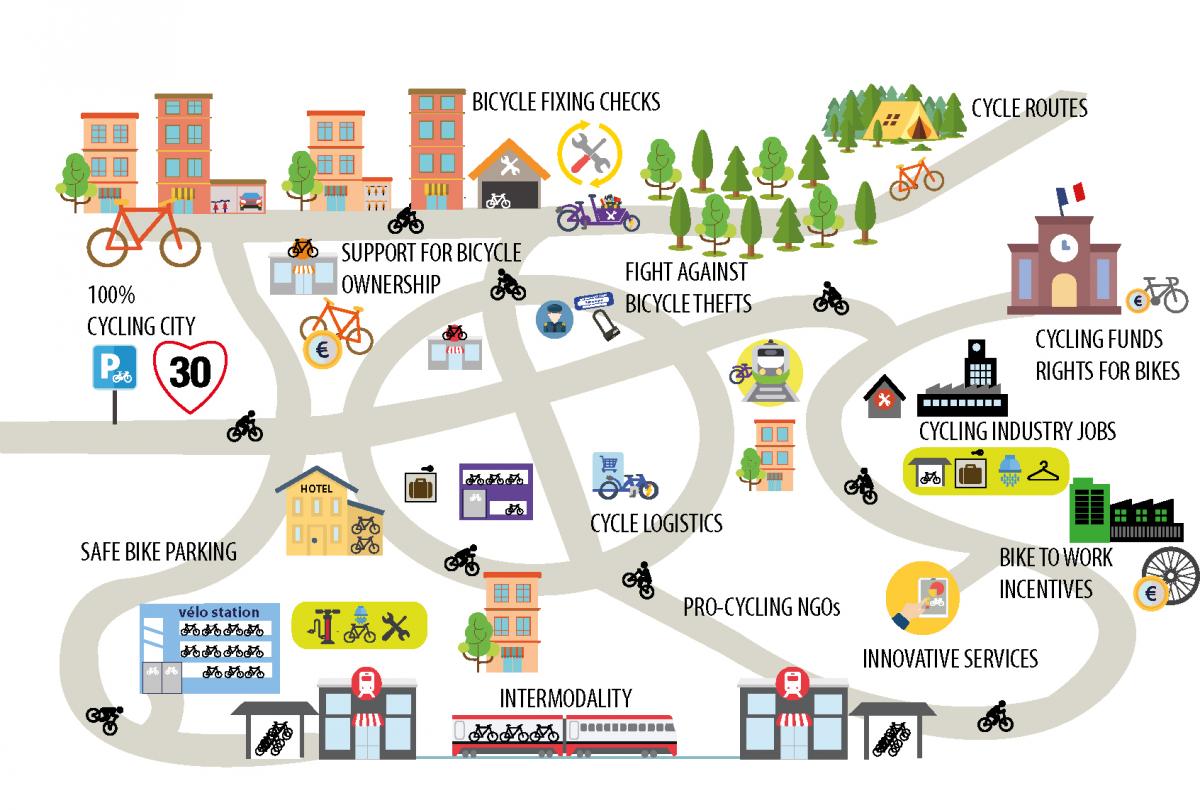